Tapping the Police to Distribute Food 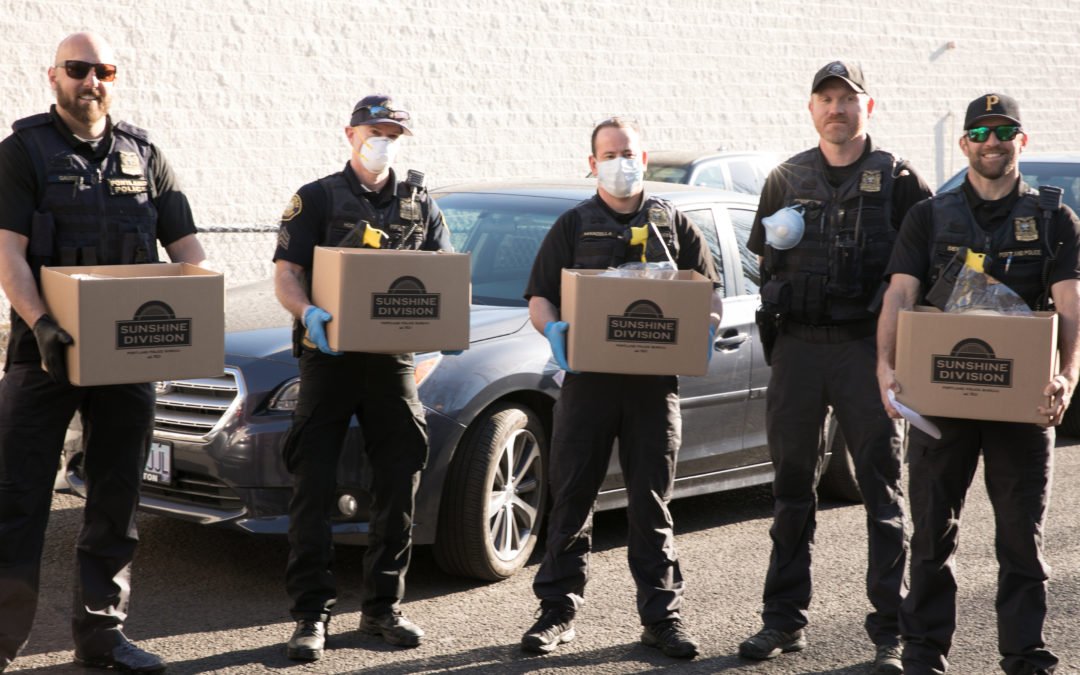 Sunshine Division, a hunger-relief agency in Portland, Ore., is getting food delivered to people who need it through what amounts to a volunteer brigade available all hours of the day and night, every day of the week.

The nimble delivery squad consists of members of the Portland Police Department who see food as an effective way to respond to families in crisis and build connections in the community. The police, in turn, give Sunshine Division a way to serve people in otherwise hard-to-reach places. The partnership stands out at a time when food banks are increasingly seeking ways to deliver services to people who may not be apt or able to travel to a pantry to get food.

“The police uniquely connect us to some of the most vulnerable people, who frankly we wouldn’t be able to touch without that connection,” said Kyle Camberg, Executive Director at Sunshine Division. “It tremendously expands our reach.”

The close connection to the police department is built into the organization’s DNA, going all the way back to the early 1920s when Portland’s police reserves adopted a version of community policing that encompassed acts of kindness, such as distributing food, clothing and firewood. A Christmas Eve tradition of passing out food boxes begun in 1923 continues to this day.

This “sunshine” division of the police bureau spun off to become its own 501c3 in the 1960s, with a police officer acting as the executive director. In 2011, Camberg became the organization’s first civilian executive director, though the police continue to maintain a strong presence on site, with Officer Matt Tobey, Bureau Liaison and Community Relations, acting as Sunshine’s main connection to the bureau.

Officer Tobey, employed by the city but with a desk at Sunshine, fields calls and emails from a network of more than 900 police officers, resulting in hundreds of referrals to Sunshine of people in need of food. Officers on patrol also often carry food boxes (consisting of 35 to 40 pounds of non-perishable food) in their trunks, dispensing them at their discretion. Residents can also call a non-911 number and have food dispatched to them by the police within a day.

The partnership is just as beneficial to the police department, which takes advantage of the opportunity to build good will through the power of food. “It’s our best tool to connect with community members, particularly new ones from other countries who may not be comfortable with the police where they come from,” Officer Tobey said. “It really helps us as officers to have a tool to break down uncomfortable barriers. They understand we are there to help them.”

In addition to acting as food ambassadors, the police in Portland undertake an annual “Shop with a Cop” program, aimed at connecting kids and police officers in a positive experience. Every August, about 100 or so police officers assist about 275 kids in a one-day shopping excursion where they can get deeply discounted back-to-school clothes. Throughout the year, another 200 or so kids will go on shopping trips as they get referred to the program. All in all, about $60,000 annually will go toward gift cards of $200 for bigger kids and $140 for little ones.

Sunshine Division, which operates two large pantries and also distributes food to about 50 other agencies, is not the only hunger-relief organization to tap into the power of the police force to distribute food. Gleaners Food Bank of Indiana works with its public safety departments to organize summer mobile food-pantry distributions in neighborhoods marked by low resources and high unemployment, and also prepares food bags for police officers to distribute in emergency situations. And Farm Share of Homestead, Fla., has worked with local law enforcement to bring food distributions to under-resourced communities.

Sunshine Division, however, stands apart for the depth and breadth of its partnership with the police. Other hunger relief organizations interested in pursuing such a partnership should identify one person to “own” the relationship who is willing to put the hours into it, Camberg advised.

Officer Tobey estimates he spends about one-half of his full-time position on Sunshine-related duties (and more during the busy holiday season) and the rest on training and instruction. Camberg noted, “It’s like having the world’s most unique programmatic staff person on hand. He’s our secret weapon to better help people.”

This post was pulled from the Food Bank News article on March 10, 2020. To read the full article, click HERE.